Location: Home > Adventures > A Day At The Zoo

Danita and I just spent 3 weeks in Sydney.

While the opportunity to catch up with friends was great it was a good reminder, for us, of why we moved to Tasmania.

On the way back we treated ourselves to a special day in Canberra.

Now Canberra is a zoo – you just need to watch Anabelle Crabb’s “The House” to prove that – but it’s not the zoo referred to in the title of this post.

For her special birthday, earlier this year, Danita had planned to do an African Safari. 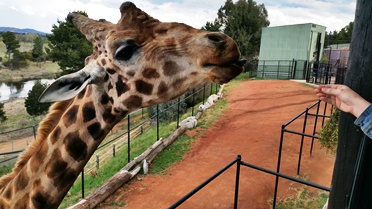 Unfortunately, that was not possible, and so it’s still on her bucket list.

However, as the consolation prize, we spent a day (and night) at Jamala Wildlife Lodge which is part of the National Zoo & Aquarium.

This is one of the most incredible experiences we’ve ever had.

We stayed in one of the Giraffe treehouses.

As you can see from the photo you get up close and personal with a giraffe, including hand feeding him.

It really is very special waking up in the morning and opening the curtain to be looking into the face of a giraffe.

Did you know giraffes have blue tongues and VERY bumpy heads?

I didn’t until this visit.

As well as the giraffe rooms there are ones for lions, tigers, bears and more. 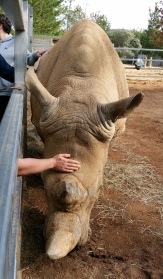 While it would, undoubtedly, be amazing seeing these animals in the wild, you can’t get up close and have direct contact the way you can at Jamala.

Imagine trying to pat a rhino in the wild – not something a sensible person would try.

At Jamala that was something else we did.

(One word of caution – you have to be sure not to get your hand between the rhino and the bars – if he leans against the bar you’ll lose your arm.)

But that’s not all.

When you arrive there’s afternoon tea ready in the common room (which wasn’t very “common” at all).

Dinner was something special which started with wine and/or champagne together with hors d’oeuvres.

The meal was a set menu and we had notified them in advance that we were vegetarian.

That meant we had a separate menu to choose from.

Breakfast was also very impressive, and I felt I really should put aside my usual practice of not eating before about 10am to make an exception in this instance.

Included in the package were a couple of tours through the zoo and we learned some fascinating things about animal behaviour – like African Painted Dogs take care of the elderly in their pack and Capuchin monkeys are in the equivalent of our stone age – they use stone tools and even craft tools to improve their function.

And so it was that our Sydney trip concluded on a high note that will give us wonderful memories for a very long time.