These comments are my ideas around what works.

They are based on my experience of being in a number of failed relationships and now one that has lasted nearly 18 years, which I consider reasonably successful. 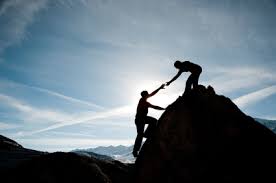 Hopefully, we can both learn from mine.

Also, I have no intention of stepping into the minefield of same-sex marriage.

So, for the purposes of this post, my definition of marriage is “two adult people in a long-term conjugal relationship”.

And now – the keys (in no particular order).

Key #1 – It’s all your fault
No matter how an issue, fight, argument, disagreement started – it’s your fault.

This was brought home to me in a recent discussion with Danita.

As you can see, whichever way it goes, it’s me who’s at fault.

Once I understood that, it made things much easier to live with.

No more, “but that’s what you said/did. How come it’s OK for you to say/do that but it’s not OK for me to?”

Key #2 – We Are Different
In his book “The Five Languages Of Love” Gary Chapman points out that we usually express love in the way we want to receive it.

This may not be the way our partner wants to be shown they are loved.

While being different is probably not a revelation to you, the implications may be profound.

Consequently, there needs to be a lot of compromise.

This doesn’t mean you give up on your core values – there will be aspects of yourself or the other person that are “not negotiable”.

These need to be respected.

However, there are many things that, on our own, we would do one way, but the other person doesn’t want it done like that.

Thus, we need to respect that and find ways to accommodate the other person’s requirements.

Having said that, remember that no-one wants a door-mat (if they do then the question is – is that the type of relationship you want to be in?)

It’s important to allow your partner to be the person they are, without you making demands that they change.

Key #3 – Lead By Example
Your partner/husband/wife is not a mind-reader.

So often we seem to expect the other person to know what we want, or need, without us actually telling them.

Referring back to my comments about the Five Languages Of Love, don’t expect your partner to instinctively know how you want to been shown love without telling him/her.

That can create a set of expectations which can’t be met, leading to conversations like; “What’s wrong, you don’t seem to be very happy?” only to get the response “If you don’t know what’s wrong then I’m not going to tell you”.

Key #4 – It Isn’t Personal
As we are different we each have our own way of dealing with stress and difficult situations.

Some people withdraw into themselves and become uncommunicative while others may become angry and shout a lot.

In a relationship we are often challenged by behaviour which doesn’t match our own and we think it’s something we’ve done (see point #1 above).

This can often result in us reacting to the situation rather than appropriately responding.

Have you ever found yourself in a conflict and had a moment to think about what was going on and realised you didn’t know what your r=were arguing about?

Sadly, this may result in things being said or done which are hurtful and stick with the other person, thus overshadowing any future communication.

Key #5 – Make Your Life Together An Adventure
Nothing will kill a relationship more than boredom.

Reacting to boredom people either withdraw, become frustrated and aggressive or look for excitement elsewhere.

So make a point of having some shared adventures, that could be short breaks and holidays, or even (as we have done) setting aside one day a week where we make a point of doing something f=different – it may be drive to somewhere we’ve never been before, or going to a play or visiting the local pub when they have live music or whatever works for you.

Being spontaneous is an important aspect of this.

If you work five days a week, don’t make the weekend just about housework.

Go and do something different, the housework will still be there when you get back and if you’re feeling refreshed it will be easier to get done.

Key #6 – Catch Each Other Doing The Right Thing
In his management book, The One Minute Manager, Kenneth Blanchard talks about looking for opportunities to acknowledge other people when you see them doing the right thing.

We’re very good at noticing when someone makes a mistake.

If we are reasonably sensitive to others we are usually aware when we’ve done the wrong thing and will feel bad about it and berate ourselves.

The last thing we need, at that point, is to have someone tell us about our mistake, especially someone who is very important to us.

Conversely, we are very poor at acknowledging to ourselves when we do something well.

At this point, having it recognised by our loved ones and being told that we’ve done well lifts our self-esteem and draws us closer to the other person.

Key #7 – Have Designated Responsibilities
There are a number of jobs around the house which need to be done, usually on a regular and repetitive basis.

If these are divided up between you then one person doesn’t end up feeling that running the household is entirely their responsibility.

In our house a couple of the tasks which are my responsibility are keeping up the wood supply for the fire and emptying the dishwasher each morning.

While I do other things around the house these are examples of “my jobs” and Danita will leave them for me to do and she doesn’t start to feel resentful if they aren’t done at their usual time.

She knows they will get done and doesn’t build up resentment that there’s another job for her to do.

And finally, a few thoughts on marriage

“We are not perfect, but we are perfect for each other.”