This is because they can often lead to resentment where one party feels they haven’t had as much value relative to the amount of value they provide.

Or there’s a lack of clarity about the terms of the agreement.

Or because it creates a non-cash mindset and energy flow around the business.

However, occasionally one comes along which is too good to refuse.

Such was the case a year ago when I met Kirana Haag.

Having known Danita through She Business Kirana was one of our first visitors after we moved to Tasmania.

Over lunch and a glass or two of wine, we found we got on very well and when I told her about my use of Astrology with my business coaching clients she asked if we could do a swap.

Since the cost of one of her paintings was the same as my coaching fee for a year it seemed like a good deal to me, especially as I like having original artworks around.

And so we began.

Kirana works in an intriguing way.

Rather than asking you what you would like a painting of, she gets to know you, interviews you and finds out about your life, what colours you like and how you’d like to feel when you see her piece hanging in your space.

She does stipulate that if you don’t like the result she will redo it for you.

After a while, I got a message from her saying the piece had been started and she sent a photo.

Remembering her comment about replacing it if I didn’t like it, I looked at the developing work with some trepidation. 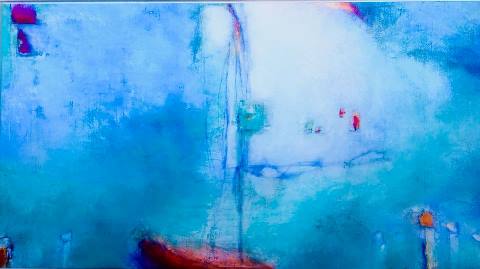 The colours were not at all what I had thought, I couldn’t relate to any of the imagery and I was feeling decidedly nervous about the outcome.

Rather than tell her I wasn’t happy with how it was going I decided to wait until it was finished and asked that she not send me any more progress shots.

This turned out to be an excellent decision and it’s now something she has made her standard approach.

A short time ago the painting arrived.

As the process is, she gets it framed and then does some final touches, together with the fact that she works in Sydney and the piece was too big to frame and then transport there were some interesting logistical challenges to make sure it was delivered in a manner that we could not see it before it was complete.

The first thing was to find a good framer near to us who would be able to get it done in a very short time.

(You need to keep in mind that it is 110 x 190cm, which is about as big as a large dining room table and bigger than a normal door.)

Kirana brought the painting with her on the plane and then took it to the framer for setting up.

He then delivered it to us wrapped in brown paper – Christo would have been proud.

On Sunday morning Kirana arrived, together with her assistant (and daughter), Layla, to finish the work and Danita and I went out and found things to do while we waited for the call to return.

On entering our lounge room Danita and I were both completely overwhelmed – the painting is amazing.

Due to its size, it does take over the space but it makes the room so much lighter than it was without it.

It bears no resemblance to the photos Kirana had sent at the beginning of the process, which was a huge relief.

Interestingly, the work she did on it in those early days was still there buried beneath the final colours and shapes.

While not being able to see it, it does add a depth and is energetically contained within the final work, so it is there and has an impact, although it’s impossible to say exactly what that is.

And
Carrying your experience,
You are stepping forward,
Shining the Light,
Leading
For others to follow
For others to learn,
From your Heart.