As you know, Danita and I have a fur baby aka four legged child aka the kid who eats off the floor aka Sancho.

To us he’s still a child but in the doggy world he’s a seriously senior citizen.

His next birthday is in November and he’ll be 16 which makes him the equivalent of 112. 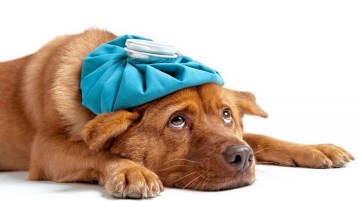 For a centenarian his health is very good.

However, as my opthamologist and rheumatologist pointed out to me, he does have issues due to having had too many birthdays.

My general view is that birthdays are good for your health – after all the people who have the most live the longest.

However, having lots of birthdays does have consequences.

In Sancho’s case it was his teeth.

Until recently, whenever he went to the vet, the comment was “he has great teeth”.

That suddenly changed and even getting multiple opinions gave the same result – he needed his teeth cleaned and potentially some removed.

For some strange reason vets are reluctant to put their hands into a dog’s mouth, and so this process requires a general anaesthetic with a small risk of complications.

A few weeks ago Sancho had his op and seemed to recover very well.

He had a couple of teeth removed as well as another couple which apparently fell out when touched.

He recovered from that part and all seemed to be going swimmingly until a couple of days after the operation.

He developed a cough.

We suspected he may have contracted kennel cough or something similar and took him back to the vet.

The diagnosis was that this is a common occurrence and is due to the tube which was put down his throat during the operation.

This tends to irritate the throat and can take up to a couple of weeks to correct itself.

In the meantime a course of antibiotics was prescribed just to be sure there was no infection.

The cough has been persistent and consistent.

While it’s obviously uncomfortable for him – he’s not the cheerful fellow we’re used to – it’s annoying and frustrating for us.

The worst part is feeling so helpless and the sleepless nights.

At some point in our relationship with Sancho he got into the habit of sleeping on our bed and we haven’t been able to break the habit.

His practice is to sleep lying against my back which is particularly helpful on cold winter nights.

However, having him coughing in my ear for the whole night does make for very little sleep for the entire family.

Not only is he coughing but he’s unsettled, and is now prone to going wandering around the bed through the night, usually walking across Danita and my heads.

Another contribution to no sleep.

As I mentioned, one of the worst things about this situation is feeling so helpless.

It’s very much like having a sick child where there seems to be nothing you can do to make them feel better.

He’s been on various medications from the vet as well as a home brew of honey, coconut oil, lemon juice, warm water and some cough syrup (a bit like a non-alcoholic hot toddy).

We’re making every effort to keep him warm.

According to the vet we’re doing everything right and yet there’s been no significant change.

He’s now had his follow-up appointment to check his teeth and the vet is very happy with the state they are in.

That’s great news but the side-effects of the operation have been diabolical.

It may be a case of “if you do nothing it takes a couple of weeks to get better and if you medicate him it will take 14 days”.

We’re hoping he gets better very soon as it’s driving us crazy, not to mention the impact it’s having on him.

As with a sick child we are SO looking forward to a good night’s sleep.