Location: Home > The Cosmic > This Is My God

We all know that the physical Universe consists of atoms and molecules which all came from the heart of stars. 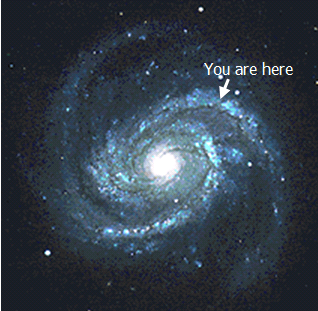 So, from that perspective we’re all made of star dust.

On the physical level the Universe is orderly and reasonably predictable – if you drop on object when you’re standing on the Earth it’ll fall. If you do the same thing in space there’s a different behaviour but we understand it.

However, as humans we have other attributes besides our physical bodies.

We can think, emote, intuit.

Where does that ability come from?

According to many modern scientists, who I think are missing a huge piece of the complete picture, it’s all a function of our brains.

(I recently came across a TED presentation by Neuroscientist Daniel Wolpert, called “The real reason for brains“. He argues that our brain’s purpose is specifically to enable movement.)

Returning to my primary question: where does our ability to think, be passionate, creative and build (or destroy) an entire planet come from?

In fact, I’d argue, and many people in the world of so-called New Physics are also, that consciousness is an even more fundamental building block of the Universe than Hydrogen or even the sub-atomic particles. 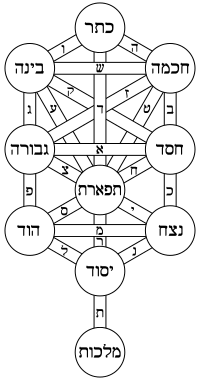 After all, if you keep subdividing these fundamental particles you reach a point where matter and energy become interchangeable and where we talk about Consciousness as the true (pre Big Bang) originator of “Life, The Universe and Everything”.

This Universal Consciousness is what I understand is meant by “God” when referred to using Jewish terminology.

If we accept that we have the attributes mentioned above (thinking, feeling etc) then they must exist as components of the Universe – rather than creations of the lump of meat between our ears.

This brings us to the Kabbalistic Tree of Life, which ascribes attributes to the creator and divides them into 10 major characteristics or Sephirot.

So, let’s assume that this Universal Consciousness is the fundamental essence of all matter, energy and life.

Is it too much of a leap, that this “being” which has created everything and has established all the laws of physics is capable of communicating with it’s creatures?

Is it too much of a leap, that a being who can design the Solar System in such a way so that the relative sizes of the Sun and Moon and their distances from the Earth (which is the only planet we currently know of, which supports any form of life) are such that when the Sun, Moon and Earth are aligned the Moon perfectly matches the Sun (a total Solar Eclipse) would have a desire (one of those fundamental elements) to interact with these (so far) unique beings it created?

So, if we assume that the creator of “Life, The Universe and Everything” does want to interact with it’s creation, what would that interaction look like?

For me, the Hebrew Bible is an important (probably not only) element of that interaction.

There’s another TED talk I came across recently, The History Of The World In 18 Minutes by David Christian (is this an example of nominative determinism?).

In it he explains that for life to occur on a planet there are 6 “thresholds” which need to be crossed.

By changing “threshold” to “day” you have the story of creation exactly as described in the first chapter of the Book of Genesis in the Bible.

When the Bible says “God made Man in His image” what does that mean?

For me it means we are a microcosm of the macrocosm or stated another way “as above, so below” (this will be familiar to alchemists).

As human beings we have the same set of attributes that God has but on a smaller scale.

The first time I saw the movie “What The Bleep” I came away with the understanding that religion is the science of spirituality.

Yes, I know, religion has been abused as a way to wield power and control people. Then again, so has science, technology, money, emotions – you name it. So abuse of a powerful and effective system isn’t confined to religions.

When we pray, what’s going on there? See my recent posts How Prayer Works and Praying For Yesterday for more discussion and specifics on that.

As a final point think about this: if I’m right and the creator of the ENTIRE UNIVERSE is trying to communicate with you, what’s your response, reaction, involvement in that interaction look like?

Something to think about???